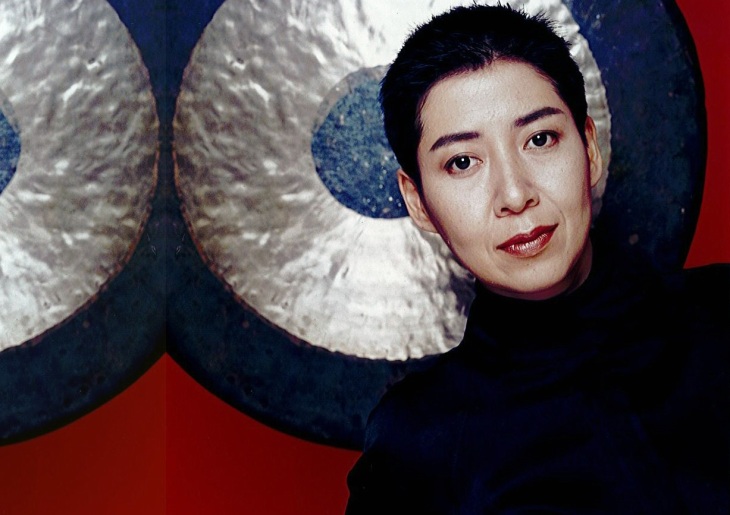 In May, I wrote a feature for the New York Times about Japanese composer/ percussionist Midori Takada, “How a Digital Rabbit Hole Gave Midori Takada’s 1983 Album a Second Life.” Like many people, I became enchanted with her wondrous album Through the Looking Glass via a YouTube algorithm and it was an honor to speak with her about her music and her outlook on the world. She spoke slowly (English is not her first language) yet with a steady pulse and as we talked, a sense of great calm and serenity overtook me. Transcribing our conversation later, that same sense of steadiness and peace returned. It’s odd to say this, but talking with Midori is meditative and one of the most affecting interviews I’ve ever conducted.

How does it feel to play in Europe and US?

It’s like church and receiving communion. When did you start playing drums?

When I was 13 years old, I was entered into the orchestra for children. There I started playing the snare drum. At the very beginning for training, I practiced on a wooden board. After one year, I played a real snare drum.

What made you continue with the drums?

For years, I continued to play just snare drum. I felt interested in it because my right side and left side were moving simultaneously or individually moving as a result of different sounds and rhythms. Making rhythms is very interesting for me so I continued playing.

Were there other drummers that you liked?

No no no. In my childhood, I didn’t have any machines for playing vinyl. So I just played by myself. I didn’t hear other drummers. Then I didn’t have other influences.

In the reissue it states that while you were with the Berlin Orchestra, you had reservations about western classical music.

There was no specific person. Before TtLG, I went to Bali. I learned gamelan music and before that, I listened to African music on vinyl. In Japan, there’s very little information about African music. I just got two vinyl records on Nonesuch Explorer: one was Tanzanian music, the other one was from Rhodesia, now Zimbabwe. I went to Bali to study gamelan. In java, gamelan is court music, but in Bali, it’s farmer music.

During my study of classical music, I came to know the work of Steve Reich, Terry Riley and Philip Glass. Before that, I knew traditional African music and was interested in it because of the cross direction of the rhythms. When I had debut concert in Paris, I certainly noticed I can’t continue this situation because that type of music needs so many instruments and musicians. For playing that type of music, I needed, it was economically difficult to sustain. With world music, it was simple to get for everybody so I at that moment I encountered African music, they have very few materials. People say it’s poor, but I think it’s a very rich philosophy. From very few materials, they produce rich sounds just using their body and hands. How to make a worldly sound by your body and with simple materials is an important thing I sought. If I continued to play westernized contemporary music, it needs many more instruments like an orchestra. But in one kettle drum, it has so many sounds from only one skin on the head of the drum. How to produce them is important, I thought.

Then I gradually changed my thought for music. I played and learned minimal music and African music. after that I went to Bali and learned gamelan music and Asian music.

What does Mkwaju mean?

Did you study in Africa?

Just for performance I went to Africa. It’s very hard to get information on African music in Japan, so I copied from the vinyl, writing down the rhythm structures and tried it by myself, playing and using right and left hand and learning how to control them. Because right hand plays 5 beats, left hand plays 4 beats, that’s African music, the polyrhythm, simultaneously, different time signatures. It changed my body.

Day by day, I trained without any emotions, just like a machine, playing in one same tempo, same sound, controlling the sound to make something like the chanting of a mantra. Playing 5 and 4 simultaneously. At the same time, I learned from Korean music. Playing these cycles, sometimes 7 beats or 20 beats, I trained every day and gradually my body changed.

After two records, Mkwaju Ensemble disbanded because of money issues, and then you had financial issues making Through the Looking Glass. Was it stressful, or difficult to make it, with no money or with financial constraints?

What is your memory of making Through the Looking Glass? Do you have a distinct memory of recording and the process?

I was given only two days for recording in the studio and making overdubs so I couldn’t spend time writing notes and music scores, I didn’t have time for that. I couldn’t rest, I was just memorizing what I would play. But the engineer and producer didn’t understand what I wanted to make. I felt great solitude in the studio.

Only I knew how the album would end. So in my brain, just in my sight, I knew the ending for the album, but it was incremental, one song I recorded or sometimes one phrase recorded. But at the moment, the staff didn’t understand what was happening. During those two days, it required great concentration to make all the sounds. It was a very hard time for me. Four pieces recorded in two days. It’s so, so hard time; but on the other side, I felt happiness, because that’s the first solo recording I had made.

But then you didn’t record your own music for the rest of the decade. Do you even wish that you had the chance to record more?

After Through the Looking Glass, I knew that my music was not popular, so there was no offer to make a new one. It doesn’t matter if the musical industry is like that. I don’t care, so I continued to make music and composition, but I didn’t have time to record.

Is the album named after the Lewis Carroll book?

There’s a YouTube video of your album that many, many people saw, and it had two million views. Did you ever see that?

I have not really. I didn’t know that, because I don’t do social media. Even a PC, I didn’t have one. (laughs) And no way to play music in my home. I just work in studio, and I don’t hear any music in home. I didn’t know that, but … But I knew later, many young people think that the TTLG sounds made by computer. I noticed that nobody thinks that someone played this by hand, all acoustic, because it’s not very economical. Nowadays it’s easy to play it by electronics, but I played it myself, of course, by acoustic. I made the album as a perspective of sounds so when this new generation listened, they felt something different, recognizing the space.

What do you think it is that made young people, I guess, understand it in a way that maybe in 1983 it wasn’t understood?

Even the staff at the studio couldn’t understand it. I was misunderstood. On the difference of culture and history, I was in touch with many cultures that have possibility to share the music.

Do you think that now you have the chance to share this music with new audience?

Jacob (who co-released the album) says it’s not as popular in Japan as it is in Europe and America.

It’s difficult playing in Japan. When people have their own concert, it needs much more money. For that, no sponsors, no help, especially for an obscure artist like me. It’s very contemporary, experimental, it’s … nobody paid money for that. People like very classical music or Japanese pop music or … so … Then, I working just in studio.

Are you excited to play in New York City?

Yes, yes, yes, very, very, very much. People in New York is very busy. If they have the chance to hear my music, maybe I could give different time.

Music for game, listening to music for games; but earphones, still, it … it’s not good for brain. It comes, it make weakness for the sensibility, for outside. To outside people, doesn’t matter what’s happened outside. What’s happened is, other, other people … For instance, in train, and street, people doesn’t notice what’s happened outside. Doesn’t pay full attention that … so it makes human weak. Then … Electric mix is … Now it’s important for life, but at the same moment, I think it’s important to get natural sound. Because ear of … Sense of ear, sensibility of ear, is very important for the … Now, it’s open for the environment, and to the world.